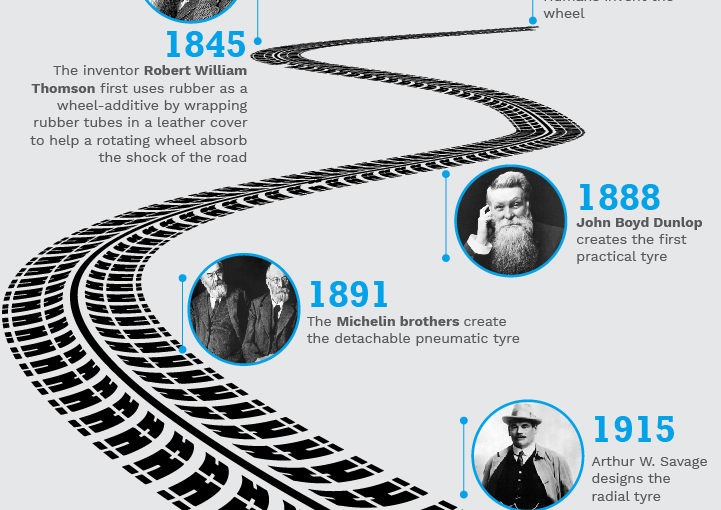 The Evolution of Tyres

Ever since the invention of the tyre first revolutionised human society, we’ve come along in leaps and bounds, from the stone wheels of our cavemen ancestors to futuristic hardware like the Oxygene Tyre, which is filled with living moss and which can absorb moisture from the road while releasing oxygen and combatting emissions.

The history of modern tyres begins in 1845, when Robert William Thomson had the revolutionary idea of using rubber as a wheel covering. Thirty years later, by the end of the 1800s, John Boyd Dunlop had created the first recognisably modern tyre and the Michelin brothers had used pneumatics to create a detachable tyre.

The infographic below illustrates the most important developments in the history of car tyres.

Now that we know about the past, the next logical step is to look forward to the future. As sustainability is such a hot topic at the moment (and with good reason), perhaps it’s no surprise that so many innovators are building it in by default into the new projects that they’re working on. Also these new tyres will possibly make driving a lot easier for new drivers, as new technologies might even be able to guide the driver and alert them of dangers on the road.

I’ve already mentioned the Oxygene Tyre, but there are plenty of others too like Pirelli’s 5G Tyre, Goodyear’s ReCharge Tyre (which can regrow its tread) and Michelin’s airless Uptis Tyre, which is built entirely from bio-sourced materials.

Of course, even though innovation might slow slightly over the next couple of years as the economy struggles to recover, there will be plenty more exciting developments for us to look

forward to in the future. Connected tyres are just the beginning. Imagine having a car that will automatically take itself to go and get serviced when it needs to – or which can detect that its own wheels are running flat and which can then re-inflate them.

These new technologies will help to make driving safer, but it also has the knock-on effect of making it more environmentally-friendly, too. If high-tech tyres can improve aerodynamics and handling, they can reduce the amount of energy that’s needed to power a vehicle, which means lower emissions. And as you can tell from the second infographic, an increasing number of manufacturers are looking to make tyres out of less damaging materials.

So what does all of this mean? Well, technologies have evolved and come a long way since the first stone wheels and the early rubber tyres, but evolution is a continuous process and we’re likely to see plenty more innovation across the space of the next ten years or so.

Tags: The Evolution of Tyres