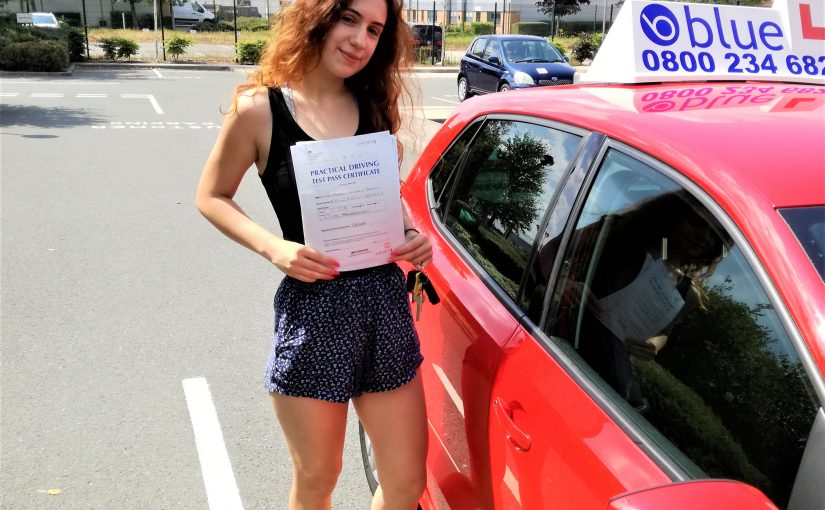 Congratulations to Rebecca Beoni of Yateley in Hampshire  who passed her driving test at Farnborough driving test centre in her very FIRST time with only a few faults well done from Vanessa Pratt your driving instructor and all at blue school of motoring. Safe Driving Yateley Driving Test Pass

When crossing or turning right, first assess whether the central reservation is deep enough to protect the full length of your vehicle. Yateley Driving Test Pass

If you need to change lane, first use your mirrors and if necessary take a quick sideways glance to make sure you will not force another road user to change course or speed. When it is safe to do so, signal to indicate your intentions to other road users and when clear, move over.

You should follow the signs and road markings and get into the lane as directed. In congested road conditions do not change lanes unnecessarily. Merging in turn is recommended but only if safe and appropriate when vehicles are travelling at a very low speed, e.g. when approaching road works or a road traffic incident. It is not recommended at high speed.

Where a single carriageway has four or more lanes, use only the lanes that signs or markings indicate. Yateley Driving Test Pass

A dual carriageway is a road which has a central reservation to separate the carriageways.

On a three-lane dual carriageway, you may use the middle lane or the right-hand lane to overtake but return to the middle and then the left-hand lane when it is safe.