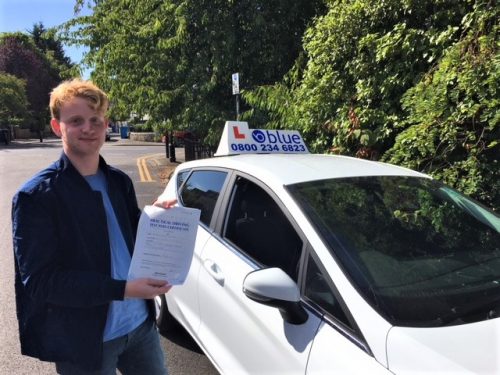 Well done Edward Woodward of Windsor.  Edward passed his driving test on his first attempt in Slough this morning. The test included a ‘pull up on the right and straight line reverse’ and Satnav independent driving.  All the best from Andy Shrimpton your driving instructor and all the team at Blue.

Meeting approaching traffic – with the exception of very narrow roads meeting traffic will mainly be where there are obstacles in the road (most of the time parked cars) and you have oncoming vehicles. Windsor Driving Test Pass for Edward Woodward

Be prepared to sacrifice priority when you’re not sure if oncoming drivers are going to let you through (where the obstruction is on their side).

Try not to leave it too late when deciding on your cause of action so that you do not find yourself coming to a sudden stop or proceeding too fast.

Try and give a car doors clearance when passing parked cars – you should be able to do this when there are no oncoming vehicles or if the road is wide enough that oncoming traffic is not affected. Windsor Driving Test Pass for Edward Woodward

Give cyclists – motorcyclists – horseriders plenty of room when passing. Give cyclists enough room where possible so that if they fell off you would still avoid them – in particular when:

If a cyclist looks over their shoulder they may be about to turn right or move out to pass an obstruction.

Check your mirrors well before changing speed or direction. Here you will be

parked up and as the obstruction is your side of the road you may need to stop.

Consider a signal and indicate right only if you think anyone will benefit.

Your road position and speed will also confirm your intentions.

Position – move over to the centre of the road where possible on approach.

Speed – approach slow enough to allow you to come to a nice, smooth stop if

traffic). The slow down and anticipate, the oncoming traffics intentions.

If you need to stop, your position will confirm your intentions aim to keep a

of the road ahead, this is referred to as a ‘hang back’ or ‘hold back’ position.

You don’t want to look like you are parking up (if you are too far to the left!).

Move off safely as soon as clear. M-S-P-S-L routine. Occasionally a blind spot

anyone will benefit. Windsor Driving Test Pass for Edward Woodward

Where you have obstructions on a narrow road

proceed, judge their speed and position to confirm their intentions to let you

through. The true meaning of flashing headlights are for ‘a warning of

you or possibly done by mistake. As this is the true meaning of flashing your

headlights do not use to beckon people on

To slow the traffic down in housing areas and near schools etc. where

otherwise traffic may go too fast. They are also located where there is simply

only room for one vehicle to pass at a time i.e. through a narrow tunnel

Slow down and assess the oncoming vehicles speed and

position to help judge their intentions, be more willing to hold

situation and not rely on other people. Be more willing to give

way to traffic travelling up a hill, especially larger vehicles