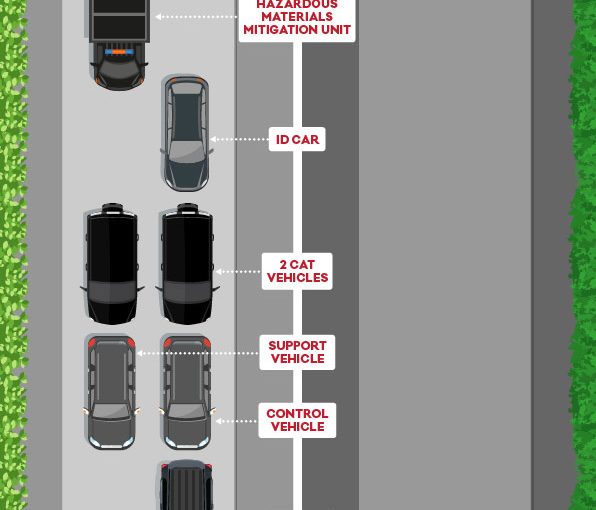 Trump: a name which undeniably divides opinion. Whilst the public’s thoughts on Donald Trump may be split, there’s no denying that his procession of vehicles during public appearances is pretty impressive; he’s certainly not a man known to do things by halves.

In the lead-up to Trump’s long-awaited trip to the UK recently scheduled in for Friday 13th July, it’s expected that he will be arriving with a large entourage in tow. As with all world leaders, security is imperative during public appearances, so it’s interesting to see the extent some go to in a bid to stay protected – as well as whipping up a bit of a frenzy.

As this image put together by Motorway Windscreens reveals, Prime Minister Theresa May typically travels with a police car, roadrunner, support vehicle, stagecoach and 4 police motorbikes during notable appearances. Donald has well and truly trumped this procession, boasting over 4 times this number with 34 vehicles present to escort him – from ambulances and police cars to motorbikes and press vehicles.

As Trump is renowned for being a man of extravagance and luxury, many may be inclined to cite this extensive procession as another act of grandiose. However, in actual fact, previous US presidents have also taken such safety measures as a precaution during public appearances, with Barack Obama travelling in a convoy of 27 cars and six police motorcycles during a visit to Sweden in 2013.

Whomever may be fulfilling the role of US president at that moment in time, it’s clear to see that there’s a more modest approach when it comes to the Prime Minister’s procession. That said, as Trump’s Environmental Protection Agency officially puts the wheels in motion to lower vehicle emission standards, we might start to see a reduction in the number of vehicles the president travels with during state visits in future.

For high quality windscreen repairs and replacements, look no further than Motorway Windscreens. Operating throughout Leeds, Grimsby, Sheffield, Doncaster, Chesterfield, Barnsley as well as the rest of the UK, we are a nationwide company with a personal touch, ensuring you stay safe on the roads. Simply contact us today to find out more or to book your vehicle in for an appointment.