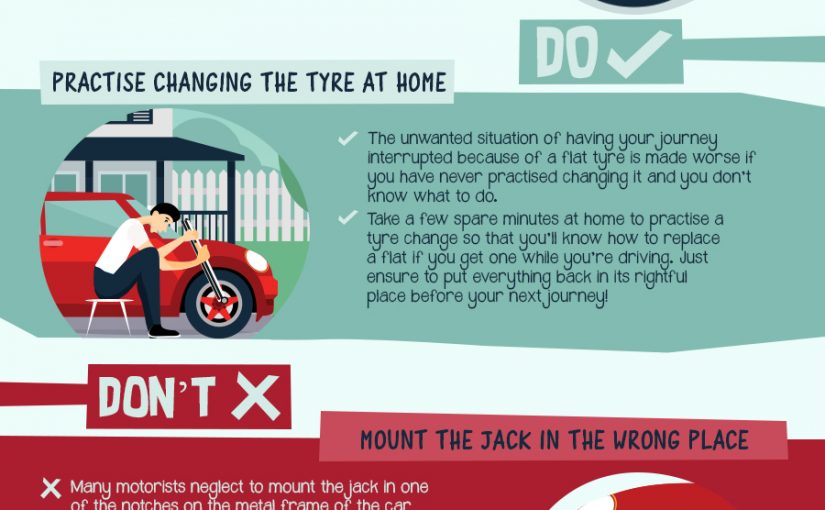 The Do’s & Don’ts of Changing a Tyre

The Do’s & Don’ts of Changing a Tyre (Infographic)

Getting a flat tyre in the middle of a journey is one of the most frustrating experiences a motorist will face, but it’s one that is likely to happen at some point. For those who know how to change a tyre, it’s a mere hiccup along the way to their destination. For those who don’t, it spells potential disaster.

The process of changing a tyre is not excessively difficult, even for drivers with limited mechanical knowledge, although it’s astonishing how many motorists have no idea where to even begin. That’s why it’s a good idea to practise tyre changes at home so that, when it comes to getting a flat in mid-journey, you can calmly tack on the spare instead of entering a massive panic.

If you need to change a tyre while driving, don’t pull over until you find somewhere that you can make the change safely. The hard shoulder of a motorway is no such place, as dozens of vehicles speed past right alongside you while you struggle for room. If you can, pull into an open area or car park so that you’ll have plenty of room to change the tyre and you won’t need to worry about obstructing anyone else.

Every few months, check the spare tyre in the boot of your car to ensure that it is in good enough condition to fulfil its role as an emergency measure. The spare is no good to you if it isn’t working properly, but you should also keep in mind that it is only a stop-gap solution. As soon as you get the chance, buy a proper tyre to replace the punctured one and return the spare to its hold in the boot.

The infographic below from First Aid Wheels (www.fawheels.co.uk) explains the major do’s and don’ts of changing a tyre so that you won’t fall victim to the silly mistakes that many drivers make when they’re faced with the situation for the first time.

Tags: The Do’s & Don’ts of Changing a Tyre