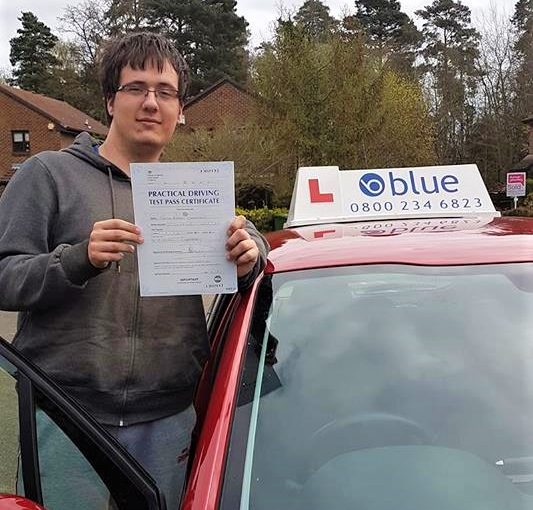 Congratulations Nathan on passing your driving Test first time today at Chertsey. Nathan had to stop on the right reverse back two car lengths and then re-join the traffic he also had to do an emergency stop. Well done Nathan all best for the future from Mick your instructor and all the team at Blue School.

Taking your theory test
The multiple choice part is delivered using a touch screen computer and the hazard perception part records your responses through the use of a computer mouse button.
If you pass one part and fail the other you’ll fail the whole test, and you’ll need to take both parts again.
The questions in each multiple choice test vary according to the category of vehicle you’re hoping to obtain a licence for, ie a motorcycle theory test will contain specific questions that don’t appear in any other test.
For the hazard perception test there are no separate versions for different vehicles, each vehicle category takes the same test, however the pass mark is different for different categories of tests.
Part one – multiple choice
Before the test starts you’ll be given instructions on how the test works.
You can also choose to go through a practice session of the multiple choice questions to get used to the layout of the test. At the end of the practice session the real test will begin.
A question and several answer options will appear onscreen and you have to select the correct answer to the question by touching the screen. Some questions may require more than one answer.
For cars and motorcycles you’ll be asked 50 questions in 57 minutes and the pass mark is 43 out of 50.
For lorries and buses you’ll be asked 60 questions in 70 minutes and the pass mark is 51 out of 60.
You can navigate between questions and ‘flag’ questions that you want to come back to later in the test. After the multiple choice part you can choose to have a break of up to three minutes before the hazard perception part starts.
Part two – hazard perception
After the break you’ll then be shown a short tutorial video clip about how the hazard perception part works.
The hazard perception part is also delivered on a computer but you respond by clicking a button on the mouse. You’ll be presented with a series of 14 video clips which feature every day road scenes. In each clip there’ll be at least one developing hazard, but one of the clips will feature two developing hazards.
To achieve a high score you’ll need to respond to the developing hazard during the early part of its development. The maximum you can score on each hazard is five.
You won’t be able to review your answers to the hazard perception test; as on the road, you’ll only have one chance to respond to the developing hazard.
The pass mark for the car and motorcycle hazard perception part of the theory test is 44 out of 75. For lorries and buses the pass mark is 50 out of 75.