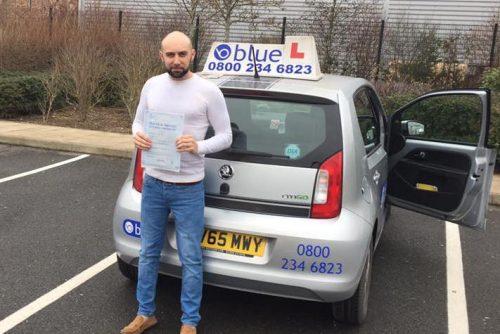 Well done to Ashley Collins from Yateley who Passed his driving test.

Well done to Ashley Collins from Yateley who had a first time pass in Farnborough today.
Only one fault for signalling the wrong way.
Well done Ash from Peter, your instructor, and all at Blue School of Motoring

If you want to learn to drive

then try a driving lesson with Blue in Yateley, Hampshire where we have some very highly trained driving instructors. We provide driving lessons for all people at different levels of driving ability, this includes:

are usually someone who has never driven a car before or maybe had one lesson.

Just started, a leaner driver that maybe has had a few hours with Mum or Dad or maybe did not get on with their previous driving instructor and wants to try someone else.

Partly trained, had maybe 10 to 15 hours of driving tuition and just wants to start again after a break.

Trained drivers, has had about 40 to 50 hours of driving tuition and maybe has failed a driving test in the past and needs a bit of help to get through the next driving test.

So no matter what your level of ability we at Blue can help you out with a driving course in the Yateley area in Hampshire.

We offer some great deals on a range of courses with qualified driving instructors who now the local Yateley area.